These reviews are making it look like I drink a lot of Cactus Jack’s, when in reality I don’t really like it at all and I don’t think I’ve even bought it before Booze Review started. Well today we have another of Cactus Jack’s fine beverages: Kool Kola Schnapps. 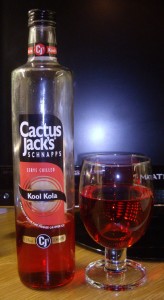 Cactus Jack’s Kool Kola Schnapps is a 15% drink in a 750ml bottle. I was given this by a friend who said “Do you want this? I can’t drink it because it makes me vomit.” so I’m really looking forward to drinking it. I would guess this bottle would normally cost around £7 but as it cost me nothing this review is already skewed slightly in its favour (as long as it doesn’t cause me to vomit uncontrollably).

The bottle design isn’t much different than the blackcurrant schnapps previously reviewed, other than some minor differences due to the larger bottle size. I have no idea why the decided to spell the name “Kool Kola” as no self respecting adult is going to think “Oh wow! Kool Kola! I’ll be the most popular guy in the office!” before rushing out to buy armfuls of the drink. On the other hand, the bright colours and funky name will appeal greatly to 6 year old girls, who I suspect this drink is mainly marketed towards. The back label uses the words “Refreshing drink sensation” so let’s hope this is something you’ll reach for after a hard day of laborious work during the long summer months.

Cactus Jack’s pours an intense, almost luminous, cherry red colour. It looks like cranberry juice if the cranberries were radioactive and full of hate. The smell is a very sweet artificial cola flavour which seems like it will get sickening quite fast. The drink tastes pretty much exactly like cola cubes with a hint of Calpol. At first this seems like a good thing as it is really easy to drink, but after a few sips it becomes overpoweringly sweet and sugary. With each mouthful you realise how thick this drink is, and as someone who prefers not to chew their alcohol, this is certainly not a favourable quality. I’m not sure if you’re meant to sip this drink or take shots, but sipping through a glass of this stuff becomes extremely unpleasant, not because of a bad taste, but because of how sweet it is. Sipping this drink does not seem like the way to go, however, at only 15%, pounding shots of it would be like drinking shots of wine meaning you’ll need to drink the entire bottle (21 shots) to get a buzz going. If I had vodka I would try mixing it to dilute some of the sweetness but Cactus Jack’s really isn’t something you’ll want to mix with non-alcoholic mixer.

Overall Cactus Jack’s Kool Kola Schnapps doesn’t taste terrible but it is far too sickening to drink all night. Unfortunately it isn’t strong enough to get you drunk unless you’re drinking large quantities of it. Kool Kola tastes slightly better than the blackcurrant flavour and only scores higher because I didn’t have to pay anything for it. Thankfully Cactus Jack’s isn’t vomit inducing, but after a glass you’ll feel like you’ve eaten several boxes of donuts and just want to lie down.

This entry was posted in Schnapps. Bookmark the permalink.