Posted on February 2, 2013 by Randy Hamblast

I was looking for booze in SuperValu when I noticed they had their weird metal cage of reduced price offerings. For those who don’t know, this wonderful little basket only appears at random times and contains heavily discounted alcohol (usually beer) due to reasons such as the can being completely smashed or being past the expiration date. Previous excavations from this treasure chest of dreams have included rusted cans of Carling for 50p each and unlabeled Heineken for 30p a bottle. Really the only downside of the booze bin is trying to carry armfulls of loose cans and bottles without destroying them even more than they already are. 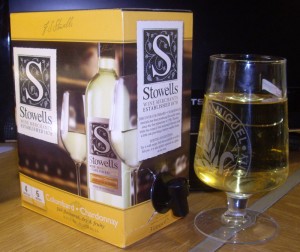 However, the most recent haul has been much better than the usual dented cans of shit lager, as the booze bin contained many boxes of wine reduced to under half price. The reason for this is that the expiration date is October 2012, but it’s not like the wine is going to contain any less alcohol.

Today’s wine of choice is Stowells Colombard Chardonnay, a 12.5% wine in a 3 litre box usually costing £20.39 but reduced to £10. This works out at £2.50 a bottle which is pretty good considering a bottle of supermarket brand piss will set you back around £3.50.  I’ve drank some kind of Stowells before and while it wasn’t great, I’m not going to turn down a 3 litre box of wine for £10, even if it is unsafe for consumption. I stocked up on these boxes and so after a week of drinking this wine, I’m quite familiar with it.

Boxes of Stowells are noticeably smaller than other brands containing the same amount. I’m not sure why this is, but it makes it easier to carry so it’s definitely a good thing. I somehow managed to cut myself on the box, but I’m not going to deduct points for it, as cutting yourself with wine is quite an achievement to accomplish (is that a phrase?). The box claims to stay fresh for 6 weeks after opening, which would be great it if was like a delicious whiskey which you can sip at and enjoy over a long period of time, but I don’t think I’ve ever opened a bottle of wine that hasn’t been finished the same day, or early the next day. I guess it’s good for people who enjoy savouring their cheap boxed wine, although I imagine that kind of person would stretch their box to well over 6 weeks.

I attempted to read the back of the box but soon gave up. Within one paragraph the text size changes at least fifteen times, all while changing font, turning bold, italic and being littered with pictures of trees, shields and pirate ships. The side of the box gives the serving suggestion “Try it with meaty fish like monkfish or with a fish pie, it is also perfect enjoyed as a glass on its own”, which translates to “Eat it with fish fingers or drink it out of the fucking bag”.

Stowells is a standard white wine coloured wine, so there isn’t anything to discuss there. Pouring it from the stupid nozzle thing is quite frustrating as it takes a really long time to fill a glass if you are only using the nozzle. It pours faster if you open the box and push down on the bag while holding the nozzle open, although I’m sure most people aren’t in such a hurry to get their wine. The wine claims to be a 2 on the dry/sweet scale (1 = dry, 9 = sweet) but it smells quite sweet. Not like a dessert wine, but it smells like it would be a 5. It smells fruity with some honey and a little apple. It slightly resembles mead, although this is very, very feint. Stowells tastes pretty good. I’m pretty sure the last bottle of Stowells I drank was a different kind, as this is much better. The wine is quite dry but also has a fruity aftertaste and it does seem like it would pair well with their die-hard suggestion of fish. There is a slightly sour aftertaste, which is possibly because it expired 3 months ago, but I quite like it. The box says it tastes like peach but I’m mostly tasting apple with a hint of fruit salad. Either way this is quite a nice wine.

Stowells turned out to be surprisingly tasty. I didn’t expect much from an out-of-date, boxed wine, but it’s very enjoyable. The worst case scenario is that the wine has expired and tastes worse that it should, but even then it’s a good wine. Combining this with it costing only £10 means Stowells is a truly fantastic wine. If I had paid full price then it would be an average wine, but costing less than any other wine I’ve seen, Stowells is at the top of its game. £10 for 4 bottles of wine. Fuck me.

This entry was posted in Wine. Bookmark the permalink.