Today we’re going to be diving deep into the world of Foster’s Rocks Classic Rum. While stumbling through the aisles of my local B&M Bargains I saw 4 cans of beer for £1.99. I expected this to be the usual reduced-alcohol-content beer you usually see for this price however I was happy to see it was actually 4.5% which is fairly reasonable. £1.99 for 4x440ml cans of beer. Not bad.

Foster’s Rocks Classic Rum is one of those beers infused with other shite which people seem to love these days. People can’t just drink beer, it has to have fruit or tequila or some other nonsense included. One time I ordered a pint in a bar and the fucker plopped a slice of orange in it. Another time I got a slice of lime in my Jack Daniel’s. This kind of behaviour is how you end up with a foot inside your asshole. 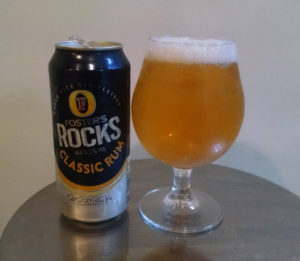 Rum flavoured beer which contains no rum and doesn’t taste like beer!

After getting it home I realised this drink doesn’t actually have any rum in it. There’s small print on the side of the can saying “Lager with rum flavouring. Refreshing lager twisted with great rum taste”. I haven’t even opened the can and I’ve already been lied to. I’m not expecting some fancy cocktail which has been painstakingly crafted with Ron Zacapa 23 rum, but for fuck sake at least add a splash of some shitty cheap rum. Something like Glen’s Rum would do the job. You’d have a better chance of getting drunk from eating a fucking Baileys cheesecake.

If you close your eyes and really focus, you can smell hints of rum. It’s fuck all of a hint to be honest since there isn’t actually any rum in this. It also smells slightly sweet and vomity. Like if you ate an entire bag of Haribo in one sitting and then spewed everywhere. Appearance-wise, Foster’s Rocks Classic Rum seems to be a little darker and cloudier than a regular lager. It also pours with a decent head. The first taste also gives the same Haribo/vomit flavour which is present in the smell. There’s also seems to be a bit of a Southern Comfort taste in the mix. It’s interesting taste to experience but definitely not something I would describe as “pleasant”. This is a drink which becomes unenjoyable after the first can and fairly sickening by the second. Unfortunately I bought 8 cans so there’s still another 6 to go.

Foster’s Rocks Classic Rum isn’t a drink I’d particularly recommend. £1.99 for 4 cans is pretty good but I’m starting to think it may have been that price because they were trying to get rid of it. If you’re not a fan of lagers you might enjoy the sweet flavour it has, as it doesn’t taste much like a standard lager. If you’re the kind of person who enjoys those fruit ciders you might enjoy this, but it’s not a fruity taste. I’d place this firmly in the category of “buy one to try, but don’t grab a crate for a piss-up”

Here we get a quick review of booze from a woman who doesn’t drink at all! Exciting stuff! Here’s what the missus has to say:

“It smells like burnt cinnamon and rotten apples. It burns your nostrils a bit.”

This entry was posted in Uncategorized. Bookmark the permalink.