Kulov Imperial Vodka is a 37.5% vodka available in a 200ml bottle for £4.19. You can buy Kulov in a normal sized bottle but I was being cheap when I bought it. I usually avoid Kulov as it’s more expensive than a cheap vodka such as Glen’s or Nordoff and isn’t as tasty as a more expensive vodka, but today it was the cheapest vodka in the shop, so I’m not going to complain. 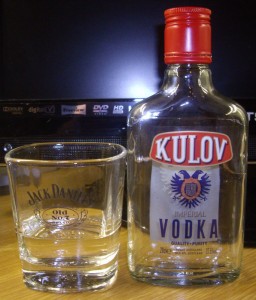 Kulov is made in Scotland, but the website says it’s only available in Ireland, so I’m not sure what’s going on there. I’m hoping it’s not so shit that even the Scots don’t want to drink it, but we’ll find out soon enough. The label says “Enjoyed straight, shaken or stirred” but I like to think it means “Enjoy straight: shaken or stirred”, giving you the option of shaking the bottle or stirring it with a pencil before drinking. I would choose the pencil to infuse it with the wooden taste of a fine whiskey, but maybe that’s just me being snobby.

Kulov smells like intense burning with a slight hint of lemon. It doesn’t smell much different than a regular cheap vodka, maybe slightly better, but there’s definitely a small touch of something different here. Kulov also has quite a neutral taste. It isn’t something I would describe as pleasant but it certainly isn’t completely unenjoyable. I remember this vodka being quite bad but it really is quite drinkable. Kulov doesn’t have as strong a chemical flavour as most other cheap vodkas although it does sometimes taste slightly like tequila. Don’t get me wrong, the methylated spirit taste is still there but it is toned down much more than Glen’s or any supermarket brand vodka.

Kulov Imperial Vodka turns out to be a pretty swallowable vodka for the price. It’s slightly more expensive than other vodkas but if you want something that tastes slightly better then it might be worth the extra money. In a screwdriver you can barely taste Kulov which gives you the benefit of pouring extra strong drinks without realising it.

This entry was posted in Vodka. Bookmark the permalink.