The second part of the Dragon Soop trilogy is Sour Apple. The Sour Apple flavour is the same as the Herbal Fusion drink, costing £2.99 for a 500ml can of 8% drink, however this time it’s a lovely green colour.

The can is exactly the same as the Herbal Fusion flavour, except it is green and says “Sour Apple” instead of “Herbal Fusion”. As there is nothing new to poke fun at, we’ll be skipping straight to the review. 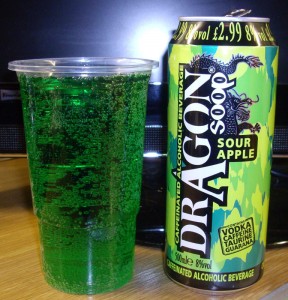 Sour Apple – Neither sour or apple.

Opening the can instantly resulted in a very strong sour apple smell, the same as the sour apple bootlace things you can buy in sweet shops. I was expecting it to be quite appley, but not this strong. It wouldn’t necessarily be a bad smell, but it’s quite an off-putting aroma to come from a drink not made for 5 year olds. I was also expecting a green colour, maybe lime green or something similar, but I was surprised to see that Dragon Soop is a dark green liquid, clearly full of colouring. Not that you should be concerned about food colouring when you’re drinking one of these. Upon further investigation of the smell, I noticed it was quite familiar to the Herbal Fusion flavour, so I wouldn’t be surprised if these drinks all started out with the same base and then colouring and flavouring was added. Even the can is the same thing with different colours. From the smell and colour, I expected Sour Apple to be an overpoweringly sour drink but I was pleasantly surprised. The drink is much less carbonated than it looks and the taste is quite mild. It’s actually not very sour at all and the apple taste is barely noticeable. Dragon Soop tastes less appley than fizzy apple juice, and while it isn’t a flavoursome drink, it’s easy enough to drink that I would definitely consider drinking one of these if I was tired and wanted the caffeine boost. It’s like a child’s version of coffee with Baileys.

Dragon Soop Sour Apple isn’t something I would order at a bar, but the high alcohol content and minimal flavour is quite appealing as a quick “pick-me-up”. The Sour Apple flavour is also much better than Herbal Fusion. It isn’t a session drink, and probably shouldn’t be used as one, but it doesn’t smell boozy and could be used for drinking in places where you can’t drink. It does make your tongue green, but I’m not complaining.

This entry was posted in Pre-Mixed. Bookmark the permalink.